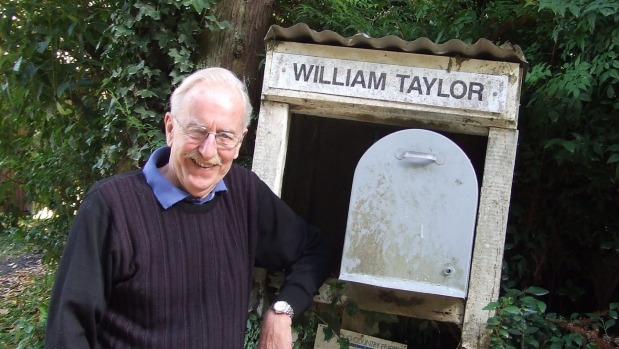 FROM THE OXFORD COMPANION TO NEW ZEALAND LITERATURE

TAYLOR, William (1938-2015), has written novels for adults but now regards these as his ‘apprenticeship’ for his successful fiction for children and teenage readers. Born in Lower Hutt, he worked in banking before attending Christchurch Teachers’ College. His teaching career includes a year in London and the years 1979-86 as principal of Ohakune Primary School, a time when he was also a solo parent, part-owner of a restaurant and (1981-88) mayor of Ohakune. His early teaching experiences are recorded in Burnt Carrots Don’t Have Legs(1976). Winning the 1984 Choysa Bursary for Children’s Writers led to full-time writing from 1986. In 1988, he served with the Volunteer Service Abroad in Bhutan until invalided home. In 1992 he was inaugural writer-in-residence at Palmerston North College of Education.

Taylor’s early ‘apprentice’ novels for adults are Episode (1970), The Mask of the Clown (1970), The Plekhov Place (1971), Pieces in a Jigsaw (1972), The Persimmon Tree (1972) and The Chrysalis (1974). Pack Up, Pick Up and Off (1981) shows the subsequent hallmarks of his children’s fiction: contemporary realism in rural and small-town settings; concern for justice and compassion for victims; compelling narrative; and acuteness in dialogue. Exuberant humour dominates the ‘Greenhill Trilogy’, beginning with The Worst Soccer Team Ever (1987); the Porter brothers series beginning with The Porter Brothers (1990); The Fatz Katz (1995); and Annie & Co and Marilyn Monroe (1995). Gentle satire enhances the comedy of Agnes the Sheep (1990), winner of the 1991 Esther Glen Award, and Knitwits (1992). Warmly comic yet moving, this traces Charlie’s preparations for the birth of a sibling to the mocking of the irrepressible Alice Pepper. Its sequel, Numbskulls (1995), is comparatively disappointing.

Serious, critical social realism drives My Summer of the Lions (1986); Shooting Through (1988); Possum Perkins (1987, published as Paradise Lane in the USA); The Kidnap of Jessie Parker(1989), his most astringent novel; Beth and Bruno (1992); and The Blue Lawn (1994), winner of the 1995 Senior Fiction Award for its sensitive exploration of the relationship between two adolescent boys.

A contributor of plays, short stories and reviews to various magazines and newspapers, Taylor also edited Zigzag (1993), a collection of short stories focusing on adolescent boys, and performs as a member of Metaphor.

William Taylor was a great supporter of our Writers in Schools programme, and visited numerous Intermediate and High School-aged children, as a teen and adult fiction writer.

William Taylor received the Esther Glen Award at the 1991 LIANZA Children’s Book Awards for his work, Agnes the Sheep.

In 1998, he received the prestigious Margaret Mahy Medal and Lecture Award.

Spider (2002) takes a bold look at teenage identity and the nature of ambition. Do we become adult by breaking away from our families, or does honesty set everyone free?

William Taylor’s novel Spider was selected as one of the titles for The White Ravens, the annual selection of outstanding books for children and young adults by the International Youth Library in Munich. Taylor’s book was one of 250 selected from over 10,000 titles submitted. The work was also listed as a 2003 Storylines Notable Senior Fiction Book.

The Blue Lawn is, arguably, William Taylor’s finest writing in a notable career as an author for young people. First published in 1994 as a Harper Collins Tui title, it was reprinted in 1995, and has now been chosen as the second Collins Modern New Zealand Classic, with the introduction written by Tessa Duder. William Taylor was made an Officer of the New Zealand Order of Merit in 2004 for services to children’s literature and the community.

His books for children also include Gladys the Goat, illustrated by Ross Kinnaird (Penguin Books, 2005). It is part of the Kiwi Bites series.

Taylor’s young adult title, Land of Milk and Honey, (HarperCollins) was published in 2005, a powerful story based on the real-life experiences of hundreds of British children who were sent as war refugees to New Zealand and Australia during WWII. The work was listed as a 2006 Storylines Notable Young Adult Fiction Book.

William Taylor’s novel Crash! The Story of Poddy (Scholastic, 2000) was re-jacketed and re-released in 2006, by the same publisher.

He delivered the Janet Frame Memorial Lecture during New Zealand Book Month in 2009.

Taylor’s completed his memoir Telling Tales: A Life in Writing (HarperCollins) in 2010.

William Taylor passed away on 3 October 2015, after a long illness.